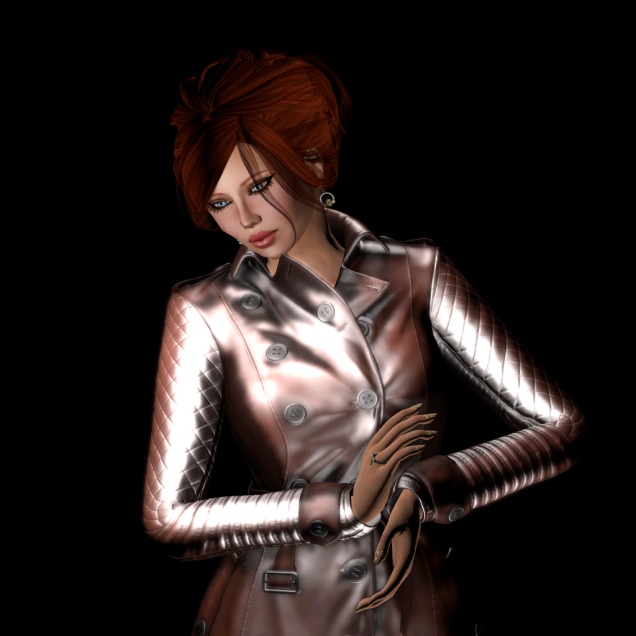 Honestly, I thought this challenge would be a breeze. Pop into Second Life, take a quick photo and write the post. No PhotoShop, no PicMonkey, no liquifying, dodging & burning, layers, painting or cloning. Simply one happy snap and BOOM! Instant blog post.

How wrong could I have been. Over four hours later, I finally have the picture. I didn’t even crop it; all I did was resize it so it wouldn’t take forever to load. Why would I put myself through such an ordeal? Because I am following through on keeping up with the Project EveryBody blogger Challenge. And this one is a doozy!

Take an SL picture of your avatar and don’t edit it. You can crop it, but other than that rely only on a natural, realistic WL and your own beautiful, unique avatar to tell a beautiful story. A raw story told with a raw photograph.

That’s it. Nothing but a raw shot to tell a story.

Actually, I kind of forgot about the second part of the challenge – letting the picture tell the tale. Looking at it, you see me in a trench coat. ZZZZZZZZZ. Not very exciting, I know. But there IS a story behind the photo, and yes, I’m going to tell it.

Taking a photo in Second Life that shows the avatar and the products (skin, hair, clothes, jewelry, etc.) in its best light is a real challenge. I originally had on a halter top that I loved. But one of the biggest issues with photographing SL avatars is that it produces squared-off shoulders, knobby elbows and knees and angular planes on the face. This normally isn’t an issue; I just use the Liquify filter in PhotoShop (or Nip Tuck in PicMonkey) to soften and round those out. But with a raw shot, those are not only exposed, but to my eye, exaggerated. So, back into my closet I ran, trying to find something that hid those pesky bits. I had recently bought a beautiful sweater, but pose after pose, a tiny bit of my neck showed through. That is normally something I wouldn’t worry about; one or two clicks with my clone stamp and it’s covered. Argggghhhh! It took me about ten minutes to remember I couldn’t do that! So once again I delved deeper into the recesses of my closet and pulled out a lovely long-sleeved dress. However, no matter what pose I tried, the elbows looked like they had been cut with pinking shears, which just wouldn’t do.

Finally, I settled on this coat. I have had it for a few months, but had never used it in a photo. I eventually found a pose I liked, but after taking a test shot I realised that the belt was poking through my hand. Only slightly, and something that ordinarily I could fix easily, but since this was a raw shot, I had to either change my clothes again or switch poses. Since I was getting a bit frustrated with my bulging wardrobe, I changed the pose. All good and ready to shoot!

But then came the Windlight dilemma. I ordinarily take a lot of different photos using different Windlight settings and then pick my favourite as a base to process. This often leaves uneven shadows or alpha halos that don’t look good raw, but can be remedied with a few steps. Dozens and dozens of WL settings later, I was about to give up. It didn’t help that my net kept crashing and I had to keep rebooting my modem and eventually swap it out for a different one to stay logged in. I had gone through my standard repertoire of light settings and I had only taken three shots, which I didn’t like. Frustration was at its peak.

I use the Firestorm viewer, which has literally hundreds of Windlight settings pre-loaded. Most of the time I actually think there are too many, making it slow to navigate to the section I want. But since my go-to settings weren’t working, I decided to try the PhotoTools series. I cycled through a few until I came to the PhotoTools – Me Love Light. And I did love it. By tweaking the time of day and east angle I came up with a light that was soft on my face, gave a bit of highlight to my hair and a beautiful glow to the leather of the coat. I sighed happily and clicked the shutter. I was done.

I have to say that I couldn’t have done this without my LUMIPro HUD . By using the lighting system I was able to enhance the Windlight, giving more definition to my face and hair. Without it I would have been forced to use a studio light which wouldn’t allow me to select such a dramatic light setting. There is depth to this photo that is thanks to my LUMIPro.

Is this photo perfect? Nope. Am I dying to liquify and smudge around my nose and jawline? You betcha. Am I aching to dodge and burn the highlights and shadows? Absolutely. But I learned something with this exercise. It made me rethink so many things I normally take for granted when shooting a fashion shot: what I am wearing, how the pose affects the clothing, how important it is to look for those tiny flaws in the shot. It made me carefully check my camera and lighting angles. Heck, it even made me toss out about 300 items in my inventory that I came across while I was searching for the perfect outfit! It was a valuable lesson, and I will remember them when I go back to shooting pictures, even knowing I will be doing post-processing.

Second Life®, Linden Lab®, Second Life Grid™, SL™, Linden™, SLurl™ and WindLight®, are trademarks of Linden Research, Inc. picsbypeep.com and Pics by Peep Photography are not affiliated with or sponsored by Linden Research."
Loading Comments...
Comment
×
%d bloggers like this: