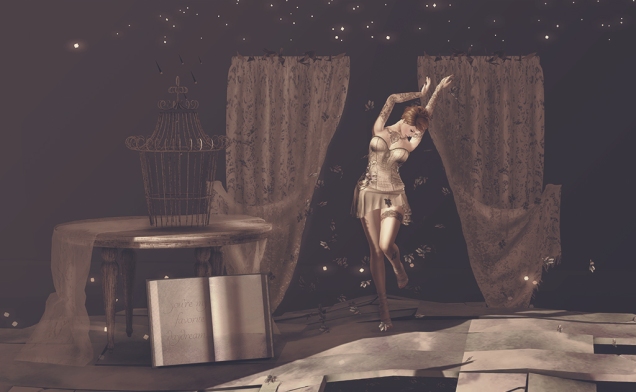 Much to talk about! I know I have been relatively quiet on the blog front recently. It’s not that I haven’t had lots of pretties to photograph, but rather that I lost my shadows a while back. Not literally; I just couldn’t photograph them any longer. Sadly, every time I had shadows enabled and clicked a pic, my viewer crashed 😦 Light and shadows have always been the most exciting part of photography for me, so when I lost the ability to use it in Second Life, my motivation to take pictures began to wane. I would still create a set, style an outfit and shoot multiple photos in varying Windlight settings, but they just seemed flat to me. I am not accomplished enough in Photoshop to create my own shadows realistically, so I just let my work on my blog dwindle to a trickle, while lamenting and daydreaming about my lost light and shade.

Then, yesterday, I decided to finally install the latest beta Firestorm update. I had held back because of the known detachment issues, but since they hadn’t yet released the alpha update in several weeks, I went ahead and installed the current version. And something happened that I didn’t realise would make such a huge difference to me in just a while…

Firestorm changed the configuration of my graphics card as relates to the viewer. I didn’t think anything about it at the time, but when I finally began to take photographs using the new interface (which I LOVE, by the way!!) I noticed that the refresh rate was amazingly faster than it was before. Holding my breath, I went into Preferences and enabled Sun, Moon & Projectors, clicked my virtual shutter-release button and…

Nothing happened. Well, at least not what I was dreading – the crash, the swear words, the frustration, the reboot! The image simply refreshed within a couple of seconds! Considering it previously took up to 20 seconds to refresh an image using the old version sans shadows, I was dancing and laughing like a two-year old hyped up on Frogs in a Pond!

On top of all of that, I got into Collabor88 and just died deliriously over the goodies from [ keke ] and Vagabond & Kalopsia! You can tell – almost every prop in this photo is from one of those creators. I needed something to showcase this lovely and feminine corset and skirt set from Salt & Pepper for We < 3 Role-Play this month, and they fit the bill magically.

It was a good day. In fact, I think I know exactly how Stella felt when she finally got her groove back. While the shadows aren’t overly evident in this photo, you should see them in some of the other forty-odd raw shots I have!

To celebrate, I’ll just be happily dwelling amongst the shadows and daydreams with a faraway smile on my face.

Second Life®, Linden Lab®, Second Life Grid™, SL™, Linden™, SLurl™ and WindLight®, are trademarks of Linden Research, Inc. picsbypeep.com and Pics by Peep Photography are not affiliated with or sponsored by Linden Research."
Loading Comments...
Comment
×
%d bloggers like this: