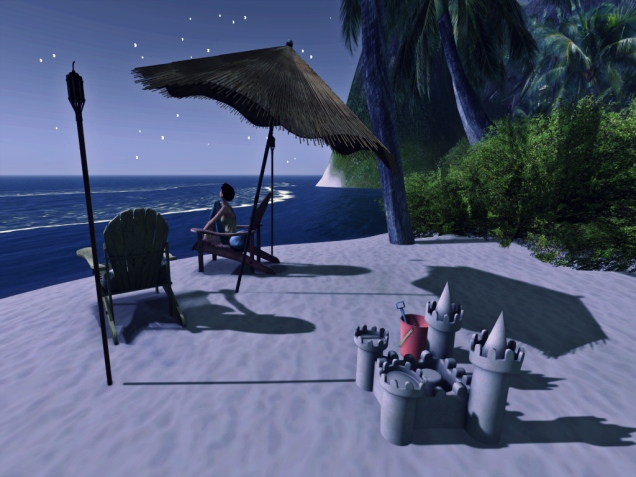 “The moon went slowly down in loveliness; she departed into the depth of the horizon, and long veil-like shadows crept up the sky through which the stars appeared. Soon, however, they too began to pale before a splendour in the east, and the advent of the dawn declared itself in the newborn blue of heaven. Quieter and yet more quiet grew the sea, quiet as the soft mist that brooded on her bosom, and covered up her troubling, as in our tempestuous life the transitory wreaths of sleep brook upon a pain-racked soul, causing it to forget its sorrow. From the east to the west sped those angels of the Dawn, from sea to sea, from mountain-top to mountain-top, scattering light from breast and wing. On they sped out of the darkness, perfect, glorious; on, over the quiet sea, over the low coast-line, and the swamps beyond, and the mountains above them; over those who slept in peace and those who woke in sorrow; over the evil and the good; over the living and the dead; over the wide world and all that breathes or has breathed thereon.”

I wasn’t sure what I wanted to write about these photos. Something about the moonlight, the coming dawn, the night into morning. Of waiting and patience. Of observation and possibly inspiration. But I am not a storyteller. I am, at best, a chronicler of life in a virtual world. So, as I often do, I looked for a song or a quote to inspire my tale.

I stumbled upon this passage from Haggard’s book, She, a story I read several years ago when I was on a Classics binge. While the plot is intriguing, exploring a realm of adventure, fantasy and feminine mystique, what spoke to me was Haggard’s lyrical prose: the way each phrase is lovingly crafted, each word building upon the previous to create a literary masterpiece. It evokes feelings of suffering, uncertainty and finally, hope. The story of Horace, Leo and Ayesha was ground-breaking when written, but the emotion I felt when I read these lines is timeless.

To sit on a deserted beach, the moon giving way to stars and finally to the promise of dawn, whether in the real or virtual world, allows the soul a chance to reflect and heal. When the crashing of the waves, the wind in the trees, the beating of one’s own heart becomes quieter and yet more quiet, peace comes at last.

4 thoughts on “Quieter And Yet More Quiet”