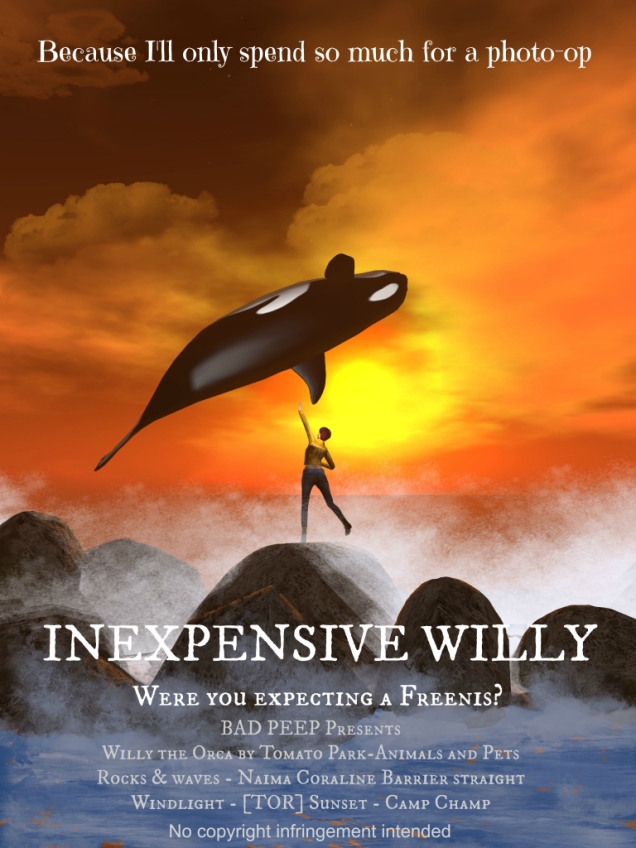 I am totally blaming Grumper for this one. Way back when I was shooting the photos for the letter F, Grumper wanted me to do a recreation of the movie poster for “Free Willy.” I laughed and asked if he meant a freenis. He was appalled. (He has an affinity for animal characters; don’t ever go talking smack about Peppa Pig!)

Alas, I had already done my photo for the letter F, so I let it go. That is until W was imminent. And although W is a rather common letter, doing a take on Free Willy just seemed more and more appealing.

I had the rocks. I live on an island. I could make the pose. I even had the outfit. All I needed was Willy.

Now, to be honest, I seriously considered using a freenis. I actually have a couple in my inventory – gag gifts I have received over the years. But I didn’t have one that had the right bend to it to mimic Willy’s arching back (sorry guys). So, that meant that if I was going to do this, I would have to *gulp* buy one.

I couldn’t do it.

Unfortunately, I didn’t have a single whale in my inventory. I toyed with the idea of using the friggin’ laser shark, but he has no arch to his back and his laser beam kept interfering with the sunset.

That left me with procuring an Orca. Now, I know I said at the beginning of this challenge I wasn’t going to buy anything specifically to complete one of my posts. But since Willy is now swimming and leaping about in the bay, I can claim he was purchased to enhance our island living. I don’t even have to cross my fingers!

Oh, and I’m not kidding about the inexpensive part. I got three sizes for L$210. Every girl should be spoiled for choice when it comes to deciding on a Willy 😉

Pose: Willy by me (not for sale)

7 thoughts on “W Is For Willy”