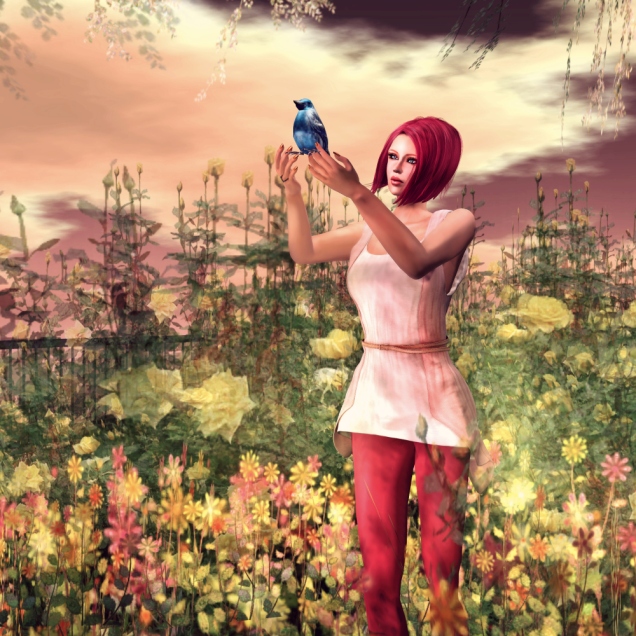 Every fashion blogger in Second Life has one thing they use in every post – a pose. But rarely are the poses the centerpiece of the photo. In fact, a lot of bloggers don’t even credit the pose or posemaker. I have never understood that – they are willing to credit every other thing in their photographs, but not the pose that shows it off.

Since I began doing credits for my blog I have always included the pose, whether it is still available or not. I have a huge respect for pose makers and I believe they should get the same attention as the dressmakers, hair stylists and jewelers. So, today, E is for Eternal Dream Poses, one of my favourite pose stores in Second Life.

Eternal Dream Poses may not be as well known as some of the others, but Fata Boa makes very natural poses – something that I value. Yes, some pictures scream for more drama, but for the most part, if the outfit is the hero of the photo, a natural pose is my choice. She also creates fun pose props, such as the little birdie shown here. He can change his plumage to compliment your composition – even he is a fashion maven! Or is that raven? 😉

I have been lucky enough to have been chosen for early entry (more E’s!) to this year’s Pose Fair, largely because I am a blogger who does always credit poses. I am hoping to have a few more to feature during the alphabet challenge. If they don’t fit the day’s letter, I will still be showing them off. Just keep an eye on my credits 🙂

I “SQUEEEEEEEEE’D!!” when I received this adorable pose set from Eternal Dreams Poses advent calendar and knew I had to find the perfect location to try it out. I had seen several photos of the North Pole Sleigh Ride Adventure on the Explore Second Life Flickr Group page and knew that it was the obvious choice.

This sim is a total delight. When you arrive, you are offered a ride on a horse-drawn sleigh (more on that later). But I slid down the hill to the railway station to snap this photo awaiting the Polar Express.

As you would expect, this is a family-friendly sim and there were a lot of people there, skating on the ice rink, exploring the bounteous Christmas and winter scenes and posing for photos. There was a family close to the train doing just that when I attached my pose props and plopped down (the suitcases hold the pose and the sign is separate; there is no reason you couldn’t make a different sign to hold with this pose, unless you are as hopeless at building as I am). I was immediately met with cries of, “Oh, look at Peep! Isn’t she cuteeeeeeee?” And while I tried to ignore them as I blushed and adjusted my camera angle and lighting, I couldn’t help but get caught up in their infectious delight. In fact, I ended up posing for photos for one of the girls 🙂

I admit I didn’t take as many photos as I normally would since I was feeling self-conscious, so I trudged back up the hill to hop on the sleigh to check out the rest of the sim (it is a no-fly zone). When I arrived, I noticed a man dressed all in black hanging around the sleigh. I waited a few moments to see if he was planning on taking a ride, and when he continued to loiter I hopped on for my excursion. I hadn’t traveled more than ten metres, though, when suddenly I had a passenger! The Man In Black had joined me, uninvited o.O I laughed and said hello and he greeted me in return, then didn’t speak again.

After we had driven down the hill, past the polar bears playing and through the tunnel I began feeling a bit uncomfortable. I don’t believe this interloper held any threat, but my Mama told me not to get into sleighs with strangers…so I bid my adieu and jumped off the sled with a quick “This is my stop – enjoy your ride!” and teleported home.

I wondered about his appearance at my side; I’m sure most of us in Second Life have been the subject of unwanted attention at one time or another. In the end I just decided he was a city-slicker who had never learned to drive a sleigh. I hope he was able to finish the ride – the horse seemed to know where he was going and didn’t appear to be ready to bolt 😉

As promised, here is a close up of another shade from the .::Vivid::. Slink Nails Appliers 4 pack available from today at Stuff In Stock. It reminds me of caffè latte – without the foam. 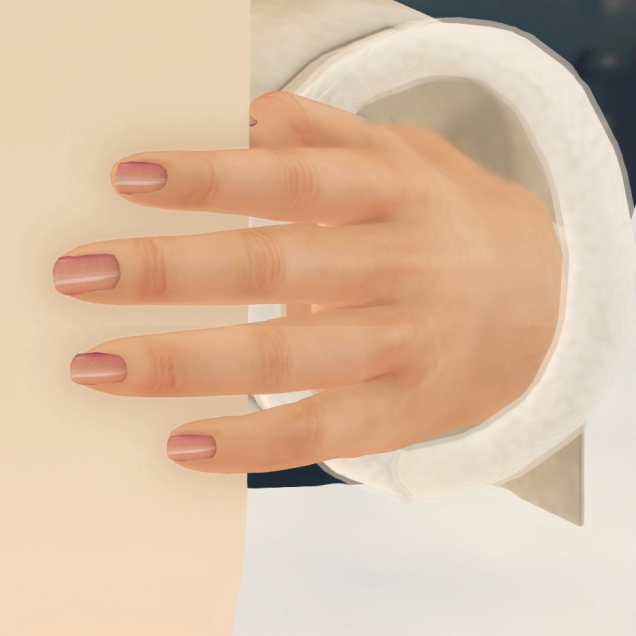