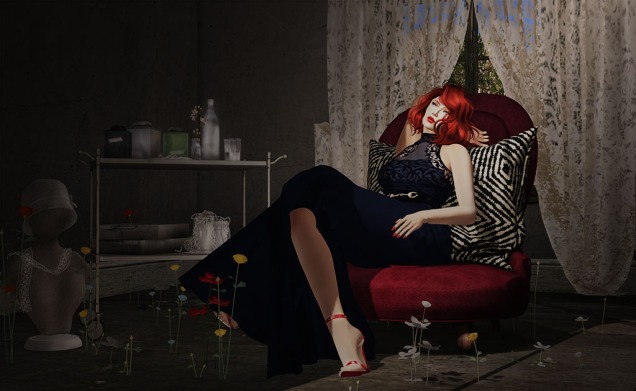 Give me a break. Who cares about Bette Davis Eyes when you can have the red hair and glamour of Rita Hayworth? The famous redhead danced her way through the glory days of Hollywood in the 40’s – one of the most glamorous times in cinematic history. While most of her films were done in black and white, there is no denying the feisty yet feminine wiles of this darling ginger. Best known for her role as the fiery “Gilda,” Hayworth was an iconic siren in a time known for its femme fatales.

I was inspired to create this scene to honour Miss Hayworth by the dress from Salt & Pepper and the strappy heels from Apple May Designs. The shoes are available now at Tres Chic and the dress will be featured at the upcoming round of Shiny Shabby (starts tomorrow). Throw in the blazing locks from Magika and the classic chair with glamour puss pose from junk., plus some props from [ keke ] and [ zerkalo ], and it is like stepping onto the set of a 1946 Hollywood film.

The skin I am wearing from ::JOLI:: is creamy and classic. It comes with a variety of mesh body appliers and make up options on tattoo layers or in appliers. It is available at Skin Fair 2016, Sim 2.

Speaking of Skin Fair, there is a week remaining and if you were thwarted in your attempts to gain entry in the first week, now is the perfect time to get in for this amazing event. For those of you who might be wondering, script limiters have now been lifted. Although Hayworth once said, “I have always felt that one of the secrets of real beauty is simplicity,” you don’t need to strip down to bare simplicity to get in to create your perfect look. 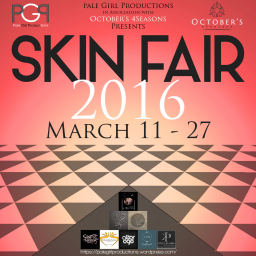 Photo taken with the LUMIPro 2016 HUD by Stefan Buscaylet