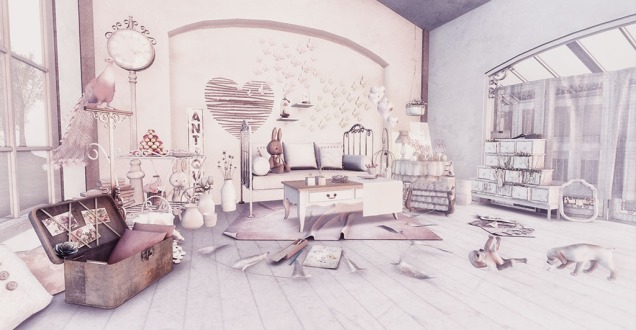 Please tell me I’m not the only person who goes to a store to buy ONE THING and comes home with a house, decor items and a nearly empty wallet?

Yeah, that was my Thursday.

I saw a beach sign from hive while I was out grid-hopping that I just had to have. So I headed over to the main store, whispering the chant, “Please don’t let it be a gacha…PLEASE don’t let it be a gacha!” When I arrived, I heaved a sigh of relief that it wasn’t. So I bought it (well, I actually bought the fatpack of signs, but it was a STEAL!) Then, instead of doing the sensible thing and TPing out, I wandered. And yeah…there it was, with a shiny “NEW” sign on it…a gacha with the most delectable shabby chic STUFF. Before I could stop myself (like I really tried *rolls eyes*) I was dropping my L’s like a male stripper’s boxers on ladies night.

I really didn’t make out too badly. I hit the rare house on only the um…well, before I was broke. I was so thrilled that I hurried home, only to realise that with my new contemporary look, I had no place to put my pretty new things. With a heavy sigh, I scurried to my barren platform and started rezzing out my goodies. Oh, so pretty! Oh, so nice!

Yeah, I had a half dozen things to place in the adorable little house, but it just felt so sparse. So, of course, that meant digging deep into my inventory for my favourites to fill the space: [ keke ], Kalopsia, {anc}, dust bunny, 8f8 and [ zerkalo ]. Throw in a couple of tables from {what next} and Meche, a rug from Apt B and a pair of puppies from Fawny and the look was complete. OK, I could have tossed in a few more things, but I was running low on prims, so I dusted off my hands, sighed happily and just admired my handiwork.

There is a big list of credits, but after all of that work, I wasn’t about to simply enjoy my little haven by myself. There is a mix of old and new – a virtual treasure trove of delights…

…that started with one lousy beach sign that didn’t even make it into the picture. 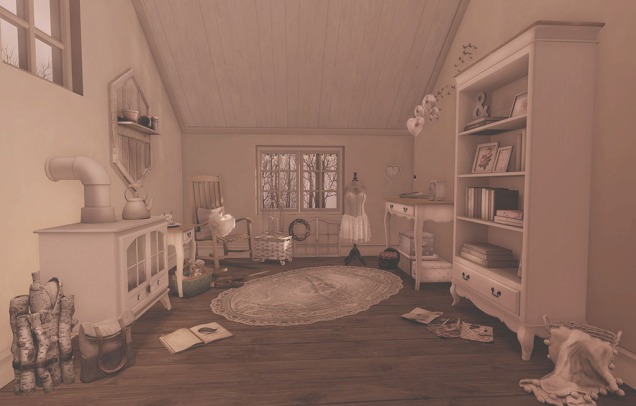 Everyone needs one – a room where you can display your favourite things, work on projects, curl up with a good book or just relax and enjoy the solitude. It may be a sewing room, a library or a playroom – it doesn’t matter, really, as long as it reflects what makes you happy.

What makes me happy is lots of pretty things. The beauty of Second Life is that I can create this type of space as many times as I would like in any fashion that suits my whimsy. Today, it is kind of an arts and crafts room. Who knows? Tomorrow it may be a padded cell 😉

A lot of the things in this room are from {what next}, including the bookcase and tables, which are available today for Fifty Linden Friday. Just head over to the main store to pick up yours. You’ll be well on the way to creating the comfort of a cozy room.

While gardening in Second Life isn’t as strenuous as in Real Life, it’s a perfect excuse to take a break after weeding and planting. Snuggling with your significant other can be as refreshing as a day at the spa.

Well, maybe not, but it does give you a warm feeling when you curl up in his lap on a soft blanket 🙂