Weddings. They happen in Second Life, just as in real life. And trust me, a virtual wedding can be just as much work to plan as a real life wedding!

My best friend and one of my Second Life sisters, Abbie, got married in December. As her maid of honour, I was involved from the beginning in helping to pick out dresses, flowers, the cake, tuxes, final decision on the venue and generally keeping the bride from totally freaking out and setting fire to the dresses, flowers, cake, tuxes and venue! (Yes, there’s a story there, perhaps to be told another day 😉 ) The wedding took place on December 22, 2012, but that was actually the third date, due to real life issues. Yes, those play a major part in any virtual wedding, from time zones to health or personal issues to internet and hardware failure (and I don’t mean the wedding night!)

Abbie asked me to be her photographer for the wedding, but I declined as the “official” photographer. Mainly because I was part of the wedding party and would be busy doing what a maid of honour does, but also because I was afraid that I might miss some magic moments. If there are technical issues with a standard photo shoot, it can be rebooked. But a wedding…well, you’ve got one shot at getting it right and god help the photographer who screws up a bride’s wedding day!

As it turned out, I took over 270 photos, anyway, from us getting ready to the ceremony to the reception and after party. I put together an album for Abbie that consisted of about 40 photos that I deemed acceptable. Part of the reason for the lower strike rate was that it’s tough taking photos on the fly. But the main reason was because while I wanted to create a theme for the photos, after a while they just seemed repetitive. I see no point in padding a portfolio just for the sake of numbers. Besides, wedding pictures can be like Aunt Georgia’s vacation pictures; after you’ve seen 15 or 20 shots of her and Uncle Ralph drunk at the luau, you’ve seen them all 😉 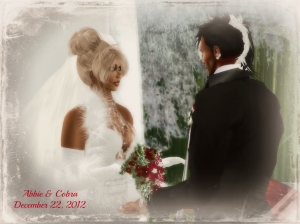 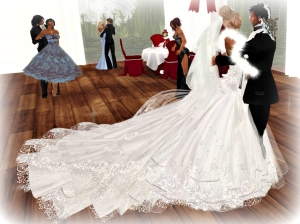 And of course, no wedding would be complete without its share of boo-boos, glitches and a random penguin!

I admit to trepidation over doing wedding photos, but when it was over, although I wasn’t completely happy with the photos I took, the important thing was that the bride and groom were. Their special day has been captured for eternity, allowing them to happily walk into the future together, hand in hand ♥